Víctor Balaguer i Cirera (Barcelona 1824 – Madrid 1901) is considered one of the most important Catalan politicians and writers of the nineteenth century. From an early age he wrote about important figures and landmarks of the Catalan culture. He understood that building a country had to be done simultaneously from all areas. That is why his ideas are incorporated in poetry, drama, prose, press and, of course, in political speeches and other political texts. During the first years (until about 1868) he was introducing concepts in his writings that helped to create a Catalan collective consciousness and, from this perspective, he has been considered a mentality creator. Many traditional Catalan symbols (Montserrat, Ripoll, Serrallonga, Poblet …) were revalued in the texts of youth and maturity. He called himself LoTrovador de Montserrat (The Troubadour of Montserrat). On the literary side note, apart from his poems and legends, we should highlight his contribution to the theater renovation with Tragèdies (Tragedies, 1876) and since the nineties the trilogy Els Pirineus (The Pyrenees, 1892), opera conducted by the musician Felip Pedrell.

He was one of the main drivers of the Renaissance especially in the recovery of the Jocs Florals (Floral Games) in which he led the most liberal and transformer movement. He was the first master in Gai Saber. Chronicler of the city of Barcelona, he named the streets of the Eixample corresponding to the names of the territories, institutions and personalities of the Crown of Aragon which he always claimed as a paradigm of liberal and democratic political organization; the book where he explains them is The Streets of Barcelona (1865). He is also the author of History of Catalonia and the Crown of Aragon (1860-63), which had a remarkable success and influence among its readers.

From mid nineteenth century he progressively joined politics and stood out as leader of the Progressive Party. He participated in the conspiracy to overthrow the Bourbons so he had to go into exile. After the revolution he worked intensively into politics and he influenced in the interest of political and economic interests of Catalonia. Víctor Balaguer was a very prominent member of the Freemasonry and was part, on four occasions (1871, 1872, 1874, 1886-88), of the Madrid governments, where he held the ministries of Public Works and Overseas.

The President will be the City Mayor.

The Vice President will be the Councilor of the area or the Service Councilor which it is attached the Autonomous Organization. 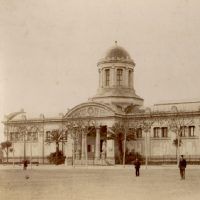 The Library Museum building was designed among 1882 – 1884 by the master builder Jeroni Granell who conceived it as a classical temple, crowned by a central dome and two symmetrical wings destined respectively to the Library and the Museum. It was one of the first public buildings constructed in Catalonia with museum purposes. The decorative style corresponds to an historical research period typical of the European culture in the late nineteenth century, with neo-Egyptian and neo-Greek ornamental repertoires with an eclectic esthetic and impressive result, characteristic of public Catalan architecture from the end of the century, just before the modernism’s rise.

The facade is dominated by four columns and a semicircular tympanum. There is in the frieze of the narthex an engraved Latin inscription Surge et Ambula –Get up and walk. Flanking the entrance, there are two monumental sculptures made by two illustrious artists from Vilanova: the Romantic poet Manuel de Cabanyes (by the sculptor Josep Campeny) and the archbishop Francesc Armanyà (by Manel Fuxà). The engravings that decorate the front and side wallsare Josep Mirabent i Gatell’s work, artist from Sitges. We can see in them different allegorical scenes about art, literature and science, with some details of clear masonry symbolism.

The building is located in the middle of a spacious garden of the nineteenth century created by Josep Piera and it is surrounded by a perimeter of wrought iron which represents schematically the papyrus shape, continuing with Egyptian reminiscences.

The Víctor Balaguer Library Museum was born in the late nineteenth century with the objective of offer to the public the opportunity to see gathered many art collections, books and ethnography which Víctor Balaguer had treasured throughout his life. The collection consisted of objects from both Catalonia and other cultures around the world, some very remote, which became part of the rooms in samples of exotic curiosities in the eyes of the people of that time.

Balaguer ordered specifically to build a new building to make public Library and Museum. With this magnificent work he was ready to contribute to the advancement of the country, as he was convinced that culture formed the basis for the progress of people.

Its foundation in 1884 coincided with the decade of the so-called Gold Rush, in the field of arts and museology, corresponds to the period of research and upgrading of the industrial and design artsthat enable the immediate birth of the Catalan modernism art.

Hence, the collections that Balaguer treasured in life didn’t adhere to the accumulation of art and literature but brought together an important collection of archeology, ethnography, crafts, decorative and industrial arts… conferring a valuable, diverse, dispersed and extremely interesting miscellaneous. With this small cosmos of objects he wanted to immerse his fellow citizens in the universality of knowledge.